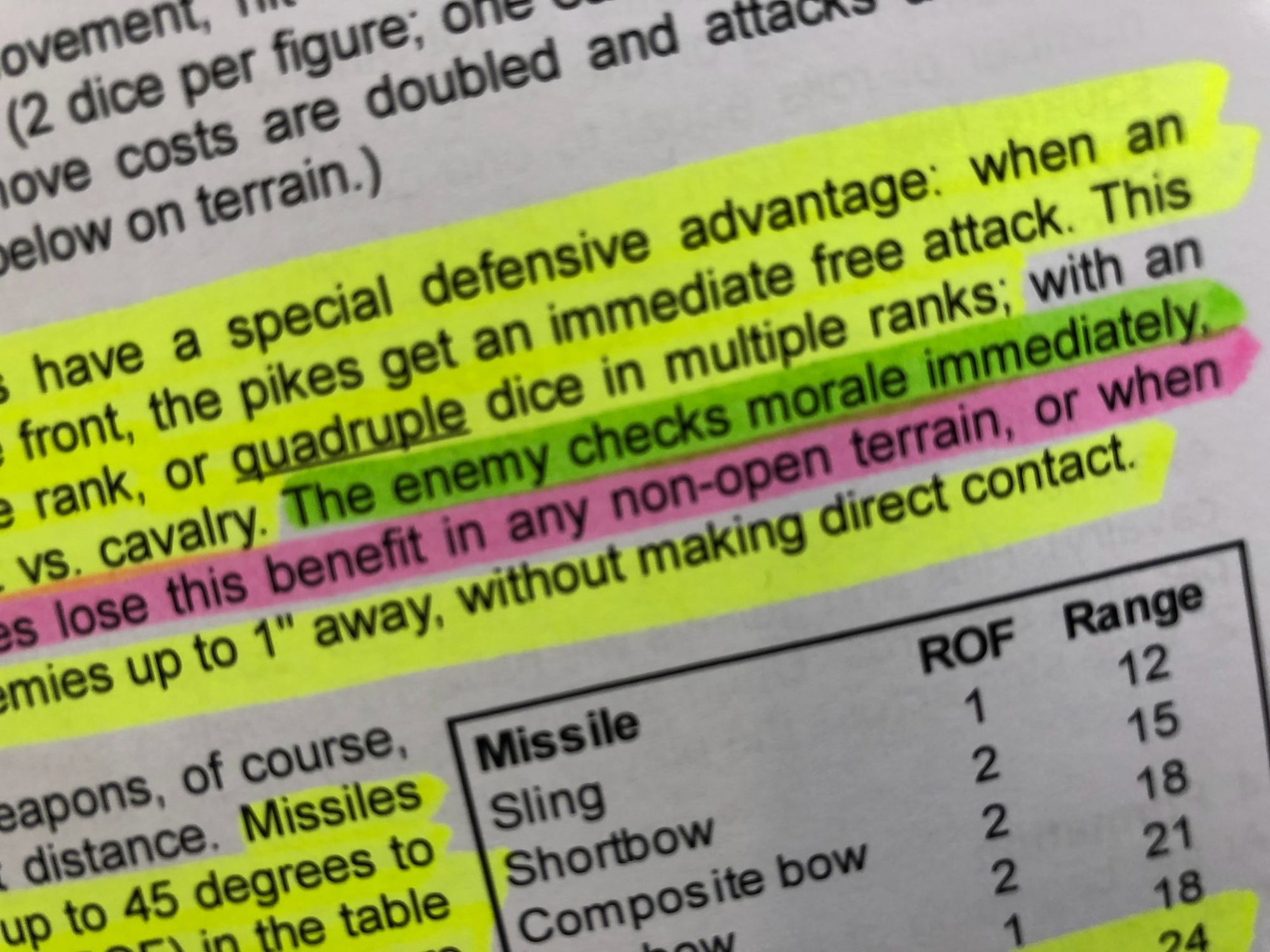 Many of the details of the Delta Book of War will be familiar to those well acquainted with Chainmail, but there are some simplifications. Among others, missile and melee phase are played out in one.

Like in Chainmail, one hit costs the receiving unit 1 HD. AC is translated in rougher and simpler AH.
Time to test.

For the first playtest, let us keep it simple:

Let us see how the actual fights work with about 40 orcs against 40 humans, each divided in 20 bowmen and 20 melee fighters.

Initiative with 2d6 each. Humans win.

Time for the orcs to move. They must reach the enemy to kill him, so their guys storm forward like madmen. Can they make a double move if they charge hard? No. Even fleeing units have only their normal movement. The orcs do not reach the humans.

Turn humans: The melee fighters would like to circle around the orcs to engage them in melee from a position that does not hinder the archers from doing their job, but even getting within 3″ would mean that bow fire could hit them. So they must stand to receive the enemy charge. The bowmen do not move and can shoot twice.

One unit misses twice, one hits. One orc troop is down.

That looks bad for the lone orc, he has actually no chance to win. So he retreats as fast as possible. That gets him out of normal bow range, but he stays in wide range. The bowmen try it again, at -1 for distance, but +1 for rear attack.

Two 1s and two 3s – our orc survivors’ gamble has paid off, the stragglers escape and can fight another day.

What can be immediately said is that the system does not really support such small numbers. With a mere 80 combatants, grouping them in 10s is too rough and dry. Calling each group of 10s a single fighter and resolving the battle with “normal” rules would work better. The Swords & Wizardry solution, basically.

But we are not done yet.

For the second playtest, let us introduce firearms and make it more complex. We have orcs, but now they are 260, and they carry muskets and sideswords. Muskets will be like heavy crossbows, with one exception. Reloading a musket takes a bit more time than reloading a heavy crossbow. For a professional soldier, that “bit more” is 3 combat rounds, or a bit less than half a minute.

The opposing force will be a mix of men and dwarves. The men are divided in a small elite unit and some raw troops. The dwarves are divided in a small elite team and a great many 2-HD-dwarves. It is a unified force of baddies against an ethnically diverse, numerically superior ragtag group of good guys. Or the other way around – we do not know their background and the system does not care who is right in the end, it cares who is left in the end. Sorry. Lame old joke.

Back to the battle map:

The raw troops (lyres) are always with the elite troops to give them some anchor.

Distance is 30 foot per square, so they start with a distance of

The orcs have it.

The orcs are in Terzios, making sure that they can always shoot with some troops while the rest reloads, as long as they do not move. But their position is fine, and the distance is very long range – too great for effective fire. They see the block and decide to roll it up from the flank by waiting for them to enter medium range. For now, they just harry the enemy with random long range fire to the left flank to soften it up. At -2 to hit AH 5 at the distance, the shots are useless.

The alliance notices the orcs insistance on the left flank and decide to mass at the right flank instead.

They carefully re-arrange their setup on the right flank and whether the storm on the left.

But that does not get them within medium range of rifles, let alone crossbows, so nothing much happens.

The orcs decide to remain on the defense, so it is all up to the dwarves and humans, as the orcs basically hand the initiative over.

They prepare a storm right out of effective musket range.

With the pivot to the right almost complete, the orcs dare an offensive move: Their right flank moves forward just inside medium range to hit the now weakened left of the dwarves.

The first casualties are suffered as a number of dwarves succumb to the orcish shots.

The humans order the dwarves with elements from the center to counterattack. This time it is the orcs who suffer losses.

But they too keep their morale.

And with good reason: Now the humans and dwarves are dangerously close to their lines, and elements from the center can support their right wing in the counterattack.

Now the right wing of the orcs has shot their guns and the two in the back are not yet done reloading.
An opportunity for the good guys to close into melee.
With two elite units, they will likely win that, and the support units cannot fire into the fray.
Fortune favors the bold! The dwarf-human-alliance attacks.

On the full front, because otherwise the orc left wing can support its center after the right wing has fallen.

During the storm, orc fire fells all the raw troops of the dwarven left wing. Otherwise it is a bit of a slog, the offensive gets stuck in the mire.

It is slow going on the right of the alliance, but it is going, and the orcs fail to fend them off. The melee goes badly, though, and the elite troops get shafted. Suffering heavy losses, morale breaks, and the survivors of the alliance left wing turn to flee the field … the fools!!

The orcs have also suffered losses across the whole front, but they yet hold. Now the humans and dwarves are at a clear disadvantage. Napoleon would never have suffered this fate, he would not have started a battle with such even numbers. Now only the gods can save the alliance.

A constant barrage of shot and arrows flits back and forth and eats away at the troops, until finally the morale of the left wing of the orcs breaks! The humans and dwarves have a chance again!

having beaten the left wing off the field, they swing around to confront the right wing.

Both sides have chewed through a lot of brave men. To retreat would mean losing, and all the blood shed for naught. It is truly a question of luck who will come out on top after this horrible battle.

Finally, as the elite dwarves lose half their number, the morale of the alliance gives out.

The surviving troops throw down and run away, the PCs remain alone on the field… which would be dumb, so they run away with their men, cursing and damning the GM.

The orcs win the day, but it is phyrric victory.

Even if their fleeing comrades return, they have lost more than half their total strength, and must retreat to their home land.

As it is so often in war, nobody has truly won.
At least nobody who was present on the field.

The system fails when it handles less than 100 combatants, but with 600 or more is works very well, and it is so closely related to Old School DnD that the transition from one to the other is, while not seamless, so still easy enough … however, it is its own game. A battle like that, including player debates and rules discussions, especially concerning the precise translation of character details like AC into the simplified version of the Book of War, and the lament of the losers, will take up most of an evening.
If a full battle session is fine for the players, one can only recommend the Book of War of Original Edition Delta.

To resolve the battle more quickly, like, in a handful of die rolls instead of details movement of units on a map, something else is needed. (Throw me a 6 worked very well for this.)

Here you can find the Rules: http://www.oedgames.com/