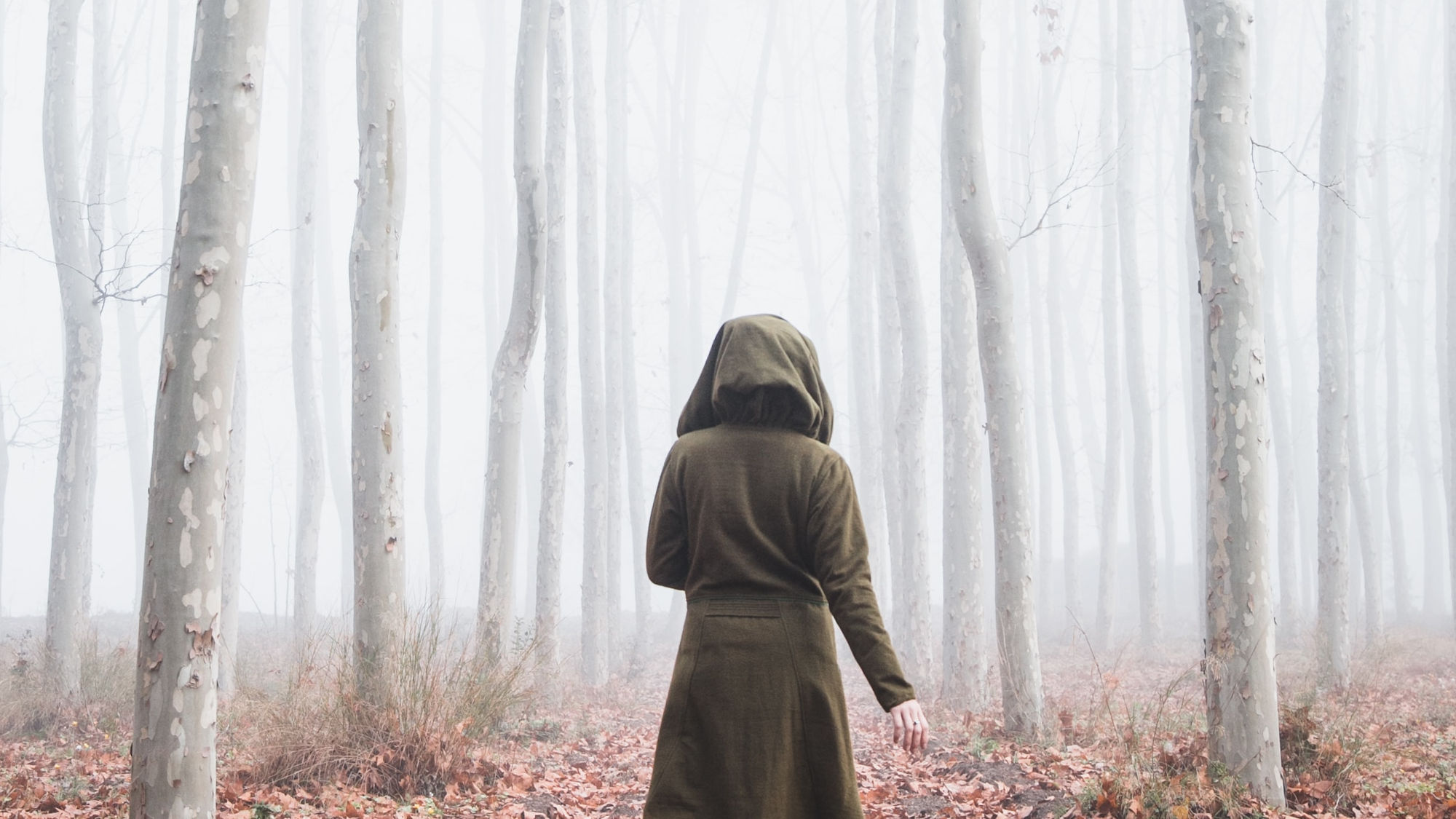 Session 3 picked up where Session 2 had left off: The group of heroes-to-be headed out East to meet Vivian, the Woman in the Woods. We were expecting important insights from her, and we already knew that the villagers generally feel the same way so we were not surprised that there was 1) a path through the wood, leading directly to Vivian’s hut, and 2) all our local hirelings/retainers had been there before and knew the way. They also warned us again about the nixies in the pond there: “They say all sorts of things, but it is all nonsense. Best to just ignore them.”

We crossed the tended fields and stepped into the wood, where the path was more overgrown and shifting, but our henchmen moved on without hesitation. Until we found a place with two standing stones and one lying stone … or fallen stone? … either way, a clearing, with a slumped down human-like form leaning on the fallen stone.

Reynard sneaked all around the clearing to make sure it was not an ambush. With his all clear sign, Stanley thought to prod the body with a stick, but saw that something moved erratically under the person’s clothes. Reinaldo was sure that the person was dead, and suggested shooting it from a distance to scare out whatever lived under that leather armor. Stanley shot, and missed, but the sound of the stone was enough to rile up three giant centipedes. They immediately crawled forward at the party.

Eostre killed hers, Defre the other one. Victory!! No, not yet: Two more centipedes crawled forth and attacked Eostre and Ephre. So it came to an ambush after all. The clerics went forward to support the fighters, but it was not necessary: Eostre destroyed her foe easily, and Reynard’s and Stanley’s shots dispatched the last one.

The team checked the body and found it an elf, dead. They took his money and divvied up his sword, shield, and armor: Ephre got the shield. Gerd came back from the underbrush just in time to get some of the coins and the sword. Defre got the leather armor. A good day for retainers!

There was also a magic user scroll, which went to Stanley, obviously, as Magic Mike was still lying low with a case of over-eating at the Inn. (= player not present)

[Fresh House Rule at the table: “Read Magic” is always prepared as an extra spell for all spellcasters … “because it would be ridiculous for a magic user to not read magic.” Unbeknownst to this table, a similar thought must have crossed James Raggi’s mind when he wrote Lamentations of the Flame Princess, where “all magic users know ‘read magic’ is even RAW.]

Short debate: What to do with the elf? Stanley wanted to cook his body to free the bones, so he could make an undead puppet out of them. Mindful of the time pressure, though, he was ready to just shove the guy up a tree for now and collect him later. And yet, there were objections, from Eostre, for one, but also supported by lawful retainers, like Defre, worshipper of the tree god Silvanus. Nobody was sure about the actual elven death customs though, until Reinaldo managed a lore check and remembered that Elves loved to be buried in the ground. Under the sullen eyes of a dissatisfied Stanley, the clerics dug a shallow grave under a tree and put the elf in, then spoke some non-religion specific words of passage, and it was done.

Reinaldo would not have objected had Stanley dug up the body later, but putting in half an hour of actual physical work to dig a hole, that was a bit much for the necromant, so the dead elf’s last rest remained undisturbed.

The nixie pond was right there near the house, and true to form, the nixies warned us of the dangerous witch, and that our only chance to survive was to throw our weapons and valuables into the pond. We did nothing of the sort, only Stanley, who owned a sling, playfully dropped some stones (a.k.a. ammo) into the water. The nixies were not happy about that, and kept clamoring. Reinaldo asked them their names, and one of them introduced herself as Silvia. The nixies were rather small, a mere 3 feet tall.

In any case, we went on, and met Vivian. She offered us food and drink, but she added “except if you have your own food”, and since we had that, we used our rations. She was very nice to talk to and offered a lot of information freely.

(Maybe because she already knew about us, from Gwendolyn the Apothecary, by way of Crow-post; amont others, she knew that we were habitually unhappy about being asked for money.)

Eostre had a word in private with Vivian, revealing to her that her own mother was also a witch; although Eostre herself does not have the patience and force of will to learn the necessary craft to bend reality. The gift is not for everyone, so Eostre chose the way of the sword instead of deep study.
Eostre offered said sword up and promised Vivian her protection against any and all that may threaten her. Vivian found this endearing, but unnecessary; in thanks she gifted Eostre with a salve to protect her against poisons.

Speaking of poisons, she mentioned that the heads of animals with poison glands (like our five centipedes earlier) may be worth something to a witch. Next time!

Furthermore, she theorised that the beast venom may be somehow related to ant acid. So she offered to ponder if she had an idea how to collect enough ant acid to do something protective with it. She will tell us via bird/Gwendolyn if she has such an idea ready to put into practice.

So our next stops are:

On the way out, Vivian spoke to the nixies and they allowed us to fish for possible valuable items in the pond. Result: Three useless rusted weapons beyond use, and one pouch of 26 gold. That weirded us out: Who would throw so much gold into the pond at the say-so of the nixies? That person must be a millionaire.

On the way back Reinaldo wanted to try a completely different path, but the others were against it. Still, we lost the way a tiny bit, so we came at a tree fully covered with big spider webs. There was some common agreement that nay, nobody wanted to go closer than 200 feet to that tree, but everyone supported Reynard’s desire to attempt an attack on the spiders … alone, though.
Reynard was anti-spider, but not anti-spider enough to try it alone, so the attack did not happen. We avoided the tree by a wide margin.

We found the standing stones again, though, and this time noticed that they were brimming with magic. Very useful if one were to know how to tap into this wild magic energy. Which we do not.

As the sun was already setting we returned “home” to the village.

“How was your day?” asked Beefy.
“Productive.” said Eostre.

And that was really the most excellent way to put it.

Next time, we go to the barrows to dig us some hero weapons.

Photo by Miriam Espacio on Unsplash