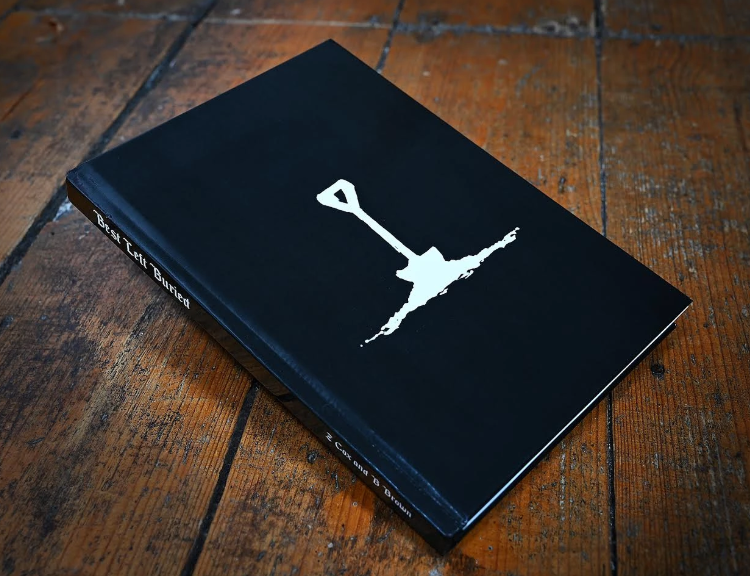 Rummaging around on Discord, I stumbled upon a link to a Kickstarter called “A Doom to Speak” coming out of a game system by the ominous name “Best Left Buried”, by Soul Muppet Publishing. By its own definition it is a fantasy horror OSR game; a rules-light system with a Sanity stat á la the famous CoC, so people can go mad or get a heart attack if shocked too hard or too often.

However, CoC is pretty voluminous, while Best Left Buried is pretty short. On a closer look it is obvious that it is based on Maze Rats – it shares its three stats and its 2d6 mechanic, and it shares its very quick learning curve and ease of use, it even references it as a help in creating characters, but it changed several important details.

For another, the standard target number in Best Left Buried is 9, not 10, so chances to make it are a lot higher. On the other hand, hitting an unarmoured opponent takes a 7, not a 6, so while making a save is easier, fighting is harder. Which makes sense. We are talking of a horror game, after all, and horrific creatures, according to common genre wisdom, don’t go down easy. Still, death seems rare… after all, dead characters cannot run away in abject terror.

For another yet, the combat system differs. Damage is not simply what goes over armour, it is the die that is left after the other dice managed to beat armour. Basically, it has a “damage die”, but you do not know before the strike which it will be. That means, while in Maze Rats strong armour means you will take a while to go down, in Best Left Buried even if something is pretty heavily armoured, it can still get a heavy hit or even die with one stab. (Not likely, but possible.)

But where Best Left Buried really shines is neither in combat nor in saves, it is in progression. Characters mainly advance very OSR-like by dragging crates full of valuables out of dank and dangerous crypts. They also advance by stoically facing horror and vile magicks. Which means: If they succeed in “Grip Checks” upon seeing something bad, they immediately gain some experience.

Conversely, employing vile, unholy magicks themselves or if they flinch in the face of evil (= fail a Grip check) that costs Grip, and the only way to avoid snapping like Ginger is to go all psychological and develop neuroses and psychoses as a coping mechanism to the sights you’ve seen.

In simple words, going “crazy” keeps you functional in the moment, for the price of accumulating mental baggage.

Clearly, that is no viable long-term strategy: Sooner or later all characters in Best Left Buried will end up either dead or dysfunctional … except if they gather enough riches to wave the adventuring life good-bye in time, while they can still go on.

heroes with a lowercase h

So, our characters are not heroic do-gooders bent on saving the world, they are losers trying to strike gold before some big bad creature eats their guts.

Is this not the most wonderful concept?

I for one am fascinated. Actual Play reports are going to follow:
Liquid Treasure
The Beast

There is also a Questing Beast review of Best Left Buried.
You can buy a copy from either Exalted Funeral or Melsonian Arts Council.
And you can get the PDFs from DriveThruRPG.
The Discord Server to discuss Best Left Buried in detail is here.

PS: Lest I forget to mention, Best Left Buried has a pretty unique way of naming things. I tend to call gamemasters GM all the time, regardless of the many names game designers fling around (directer, facilitator, narrator, storyteller, blab, blab). However, in Best Left Buried they call the GM “Doomsayer”. In my book, that is the best name yet.
They also use advantage and disadvantage mechanics, but they call them “Having the upper hand” and “Trying against the odds”. Well named.