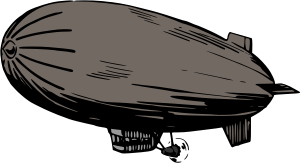 A one-shot game of Electric Bastionland – with a twist.

One of the main drivers of Into the Odd and Electric Bastionland is economy: The lack of funds, the need for treasure, and the important role of equipment in defining a character. In this game, I threw all of that out of the window by starting in prison, shortly before all the characters and several NPCs were due for execution.

At the last moment, an officer of the Armed Forces walked in to offer them a choice: Follow him and aid the army in a delicate spot, or go ahead and die.

The delinquents volunteer, of course, and go out by airship, due northwest into rough deep country terrain. At some spot there is a chasm where another airship crashed. It is difficult to reach, but the cargo has to be retrieved. If they succeed, the volunteers are free to go back to Bastion, with their lifes.

A rotten deal is better than no deal. The characters – a dexterous woman named Silfur, a stranger (= alien) with blue skin and immunity to fire named Rose, a tough guy namend Abquavaer, a villain named Reaper, and two NPCs (Rico and Gomez) – get ropes, rations and a sword each, and are let down into the chasm.

In the rock wall are caves, and there live strange apes… apes who hate intruders, so the party is already under attack. They work together and give the apes a rough time until they retreat.

Down in the chasm they find themselves on a pebble shore, and the wreck half submerged in a stream and covered by the empty envelope that used to lift the thing. The stream is also home to crocodiles. On the other shore there is a thicket that is also home to crazy little apes.

The party works together splendidly, uses what tools they have and make their way inside the gondola, where they find three dead soldiers (the late crew) and a strange sarcophagus too big to fit through the side entrance. They resist the impulse to open the sarcophagus; instead they acquire tools from the airship and rifles and a pistol from the dead men. They widen the side entrance and lift the thing out.

NPCs are people, too

At that moment, one of the NPCs, Rico, gets nabbed by a croc and pulled under. The characters do not hesitate: They leave everything and go after it to save the NPC. They kill one crocodile and wound two others, rescue and stabilize their comrade.

As a horde of apes descends upon them to steal any- and everything that is lying around, the alien sets herself on fire (she is immune to flames) and wanders around as a living torch, scaring the ape horde away.

All obstacles cleared, they hitch the sarcophagus to the ropes and give the signal to the army. The sarcophagus gets lifted up, and the whole party hitches a ride to make sure they can’t be accidentally forgotten in the chasm.

Great teamwork and creative use of physical advantages make a huge success. The army takes them back closer to Bastion and lets them hop off at the outskirts: Good Bye. The team enters the city with no possessions except some small tools and the pistol they were able to hide from the soldiers. Silfur also decides, after fighting the crocs shoulder to shoulder, to marry Gomez the NPC.